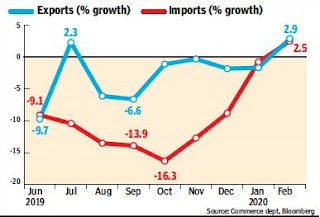 India’s exports grew for the first time in seven months, while imports returned to positive territory after falling for eight months, although traders are bracing for a fresh bout of slowdown due to the coronavirus pandemic.

Exports went up 2.9% to $37.5 billion in February, led by shipments of oil seeds, electronic goods and iron. But there were signs of a slowdown in segments such as iron ore, where China is a key market, with the growth rate moderating to 38% in February compared to an over 105% jump in the previous month.

Several industries are fearing massive slowdown in coming months due to Covid-19. The impact of factory shutdowns in China and other parts of the world is yet to reflect in the data.

Imports too rose 2.5%, with project imports, pulses and fruits and vegetables leading the pace of increase. With supply lines for products ranging from pharma ingredients and plastics to electronics drying up, economic activity and imports are expected to be impacted. Besides, a massive fall in crude oil prices will shrink the import bill. In February, oil shipments were up 14% at around $10.8 billion, while gold imports fell 8.5% to $2.4 billion.

Trade deficit was pegged at a little under $9.9 billion in February, compared to $9.7 billion a year ago and $15 billion in January. “Despite global challenges, Indian exports once again enter into growth trajectory in February after a gap of 6 months. Exports of electronic goods and chemicals grow at 37% and 16% respectively,” commerce and industry minister Piyush Goyal tweeted.