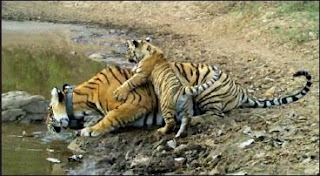 Wildlife lovers have a reason to rejoice. After a two-year wait, a tigress has given birth to a cub at Sariska Tiger Reserve.

The first photo of ST-10 and her cub was captured in Talvriksh range on Monday. With the newborn, number of big cats at STR rose to 16. The park has seven females, three males and six cubs.

Dinesh Verma Durani, founder and general secretary of Sariska Tiger Foundation, said the news has come as a respite for the STR after the death few tigers in park in past two years. “It will give fresh lease of life to the reserve. Sariska has a tremendous potential and I congratulate forest adminstration for their efforts,” he said.

According to sources, the tigers gave birth to three cubs in same range in December 2018, but they disappeared mysteriously. Tigress ST-10 also gave births to two cubs earlier named ST-11 and ST-12 in Sariska. Tiger ST-11 was killed by wire snare.