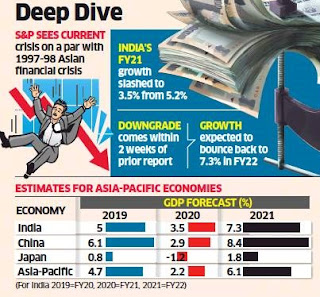 S&P Global Ratings has slashed its forecast on India’s economic growth to 3.5% for the coming fiscal year from 5.2%, the second downgrade in as many weeks, even as it likened the Covid-19 impact to the 1997-98 Asian Financial Crisis.

In a report, ‘Credit Conditions Asia-Pacific: As Bad As 1997’, S&P warned of higher defaults resulting from a demand slump due to the Covid-19 outbreak in many countries and a recession across the Asia-Pacific region.

“We now expect the hit to output for Asia-Pacific to be as large as the Asian Financial Crisis of 1997-1998,” the report said.

On March 17, before the 21-day lockdown was announced by Prime Minister Narendra Modi, S&P had lowered its growth forecast on India to 5.2% from the 5.7% expansion projected in February, while citing a global recession affecting the Asia-Pacific region.

S&P expects a sharp uptick in the Indian economy to 7.3% in FY22, according to the latest report.

Although China is gradually returning to normalcy, the worsening impact of the virus outbreak in other economies of the region is weighing on the aggregate growth, the global ratings firm said, terming the environment as “at least as challenging as the 1997-1998 Asian Financial Crisis for borrowers”.

In its March 20 report, the ratings firm had estimated a total and permanent income loss of $620 billion for the region resulting from the Covid-19 pandemic.

India Ratings & Research also cut its fiscal 2021 fore- cast on India’s growth to 3.6% from 5.5%. “The key reasons are the spread of Covid-19 and the resultant nationwide lockdown imposed till 14 April 2020, crippling most economic and commercial activities,” it said in a report released on Monday.

The local ratings firm projected the economy to grow 4.7% in the current fiscal, lower than the National Statistical Office’s advance estimate of 5%, because of the disruptions in March. On Friday, Moody’s Investors Service halved its GDP forecast for India’s growth in 2020 to 2.5%.