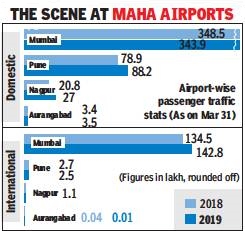 Domestic passenger traffic at the Pune airport — grappling with problems due to land unavailability — increased by close to 10 lakh in 2019, according to the state economic survey.

When it comes to domestic cargo however, the airport handled 41,515 metric tonne of cargo in 2018, which increased by only 5,763 metric tonne last year.

Sources at Pune airport said land unavailability was a problem. “While the domestic passenger traffic is good, we expected more international passengers. This was affected as many international flights from Pune were grounded last year, while there are no signs of new flights starting anytime soon,” the source said.

“The length of the runway has been a problem and things are not moving forward due to the land issues. This has hit cargo movement,” the source said.

A total of 33 acres of private land was promised for airport expansion. The previous airport director, Ajay Kumar, had said in January that they had been assured of 10 acres for the cargo handling facility. “The current international cargo hold’s location is a hindrance to the construction of the new terminal,” Kumar had said.

Around 114 metric tonne of international cargo was dispatched in 2019, compared to 51 metric tonnes in 2018. Airport director Kuldeep Singh, however, was not impressed by the over 100% increase. “Our plans to shift cargo operations from present location to new location have still not been finalized. I am sure if and when we get a new cargo complex, our operations will witness a huge a surge,” Singh said.