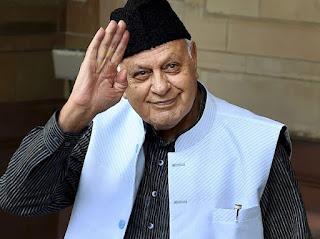 Abdullah, a former chief minister of Jammu and Kashmir has been in detention for over seven months. He was earlier detained under the J&K Public Safety Act.

Farooq Abdullah was placed under detention along with other leaders including his son and former J&K CM, Omar Abdullah on August 5, when the government ended special status to Jammu and Kashmir under Article 370 and imposed massive restrictions.

He was charged with "disturbing public order" under the law, which means shorter detention of three months.

This was the first time that the PSA, used against terrorists, separatists or stone-throwers, was used on a mainstream politician, especially an MP and a three-time Chief Minister.

Days ago, eight opposition parties sent a joint resolution to the BJP-led government, demanding the immediate release of all political detainees in Kashmir, especially the three former Chief Ministers -- Farooq and Omar Abdullah and Mehbooba Mufti. 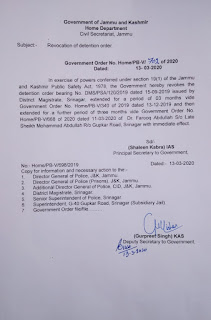