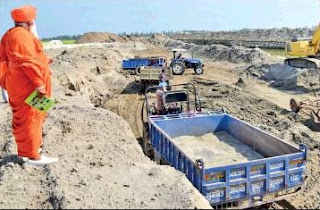 A massive desilting operation is on under the railway bridge on Satluj river near Giddarpindi village of Shahkot sub-division of Jalandhar district. It has already incurred an expenditure of Rs.50 lakh on diesel with over 80 tractors, six big excavators and three earth moving machines working daily for several hours. What’s unique about the exercise is that all the money is coming from NRIs and local donors, while farmers of the area are paying the rent for tractor-trailers.

“We have desilted 15-18 feet deep. In around a month, we have cleared one-and-a-half span of the bridge. Total 18 spans need to be desilted. Our aim is to complete desilting before the monsoon,” said environmentalist Baba Balbir Singh Seechewal, who has been leading the massive volunteer effort.

The work requires hydraulic lift trailers that are used for commercial purposes like transporting sand or soil. “We are providing diesel to all the machines and vehicles while farmers are paying daily rent of the special trolleys working with hydraulic lifts. For every such special tractor-trolley daily rent is Rs.1,400. 80 such trolleys are on the job daily, while around half-a-dozen tractors are also on the job, apart from six big excavating machines, which have also been hired on rent,” he said.

It is first example in the state when desilting of a river at such a scale is being carried out with a volunteer effort. Gidderpindi was one of the villages hit hard by the flood August last year.

Jalandhar deputy commissioner Varinder Kumar Sharma has been coordinating with government departments and has also been issuing necessary instructions to ensure that official machinery keeps pace with the volunteer effort.

Silt under and around the bridge was considered to be a major cause for floods in the area around six months back. The sand and earth being removed from the river bed are being used to strengthen and widen the earthen embankment on both sides of the river.

According to villagers, till a couple of decades back they could even pass with loaded carts from under the bridge, but due to regular silting, the gap between the river bed and the bridge reduced considerably. Under around 18 spans of the bridge, height of passages for water was left just three feet. It was reducing the flow of water during rainy season, which further lead to increase in pressure on the bundhs along the river. The reduced space would also get blocked by bushes flowing with the rain water, further cutting water flow.

Right from the days of floods, Baba Seechewal has been working in the area — first for taking relief material to the flood hit areas, then to raise bundh at the breach site, desilting the fields where extra sand got deposited during floods and then to strengthen the bundhs.