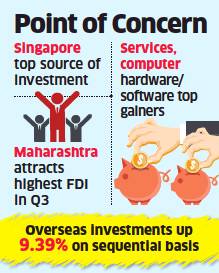 Foreign direct investment inflows dipped 1.44% on year to $10.67 billion in the October-December period of FY20. FDI inflows were $10.82 billion in the quarter ended December 31, FY19.

However, overseas investments increased 9.39% on a sequential basis from $9.76 billion in the July-September quarter. Similarly, in the April-December period, FDI rose 10% on year to $36.76 billion.

Maharashtra garnered the highest share of FDI at 29% with investments clocking $3.13 billion. Delhi and Karnataka followed with 23% and 22% share, respectively.

In the third quarter, December saw the highest inflow of $4.65 billion and November the least at $2.8 billion.

Recently, the department clarified that goods procured from units in special economic zones by single brand retailers, owned by foreign companies, would qualify for meeting the mandatory 30% local sourcing norms. It also notified the government's decision to allow 100% FDI in insurance intermediaries.