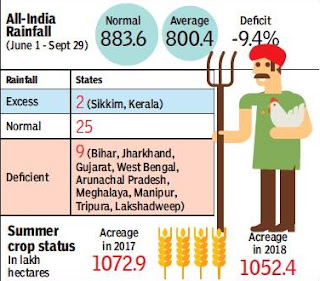 The southwest monsoon, which began to withdraw from the country on Saturday, starting from west Rajasthan, is likely to end in the ‘below-normal’ zone this year with a deficit of 9.4% so far.

The India Meteorological Department, meanwhile, released its forecast for the northeast monsoon that brings rain to south India during the October-December period, saying rainfall is likely to be ‘normal’ in the region and higher than normal in Tamil Nadu.

While the monsoon season rainfall was below expectations, sowing of kharif crops was not majorly affected because of fairly good rain distribution. The acreage under kharif this year is 1.9% less than last year’s and around 0.7% lower than normal.

Despite the over 9% monsoon deficit, water reservoir status, too, is positive this year. The June-September monsoon season is categorised as normal when rains are 96 to 104% of the long period average. Rainfall in the 90 to 96% range is termed ‘below normal’ while rains less than 90% of LPA is termed deficient, popularly referred to as a drought year.

IMD also declared the beginning of monsoon’s withdrawal, a month later than the normal date of September 1. It expects monsoon to withdraw from more areas of north India during the next two-three days.