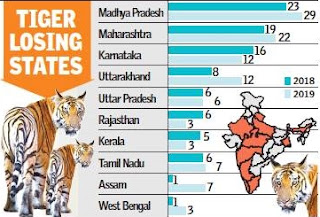 The country lost 110 tigers in the year just gone by. The year also saw death of 491 leopards, as per figures compiled by Wildlife Protection Society of India. While poaching was the key reason behind tiger mortality, road and rail accidents accounted for most of the leopard deaths.

In case of tigers, there is a marginal rise in numbers compared to 2018 when 104 tiger deaths were recorded including 34 due to poaching.

In 2019 too, 38 of the 110 deaths have been attributed to poaching. Like last year, Madhya Pradesh continues to lead the tally with 29 tiger deaths followed by Maharashtra with 22. In 2018 MP saw deaths of 23 tigers followed by 19 in Maharashtra.

However, the official database of National Tiger Conservation Authority differs with the figures. NTCA has recorded 92 tiger deaths in 2019 while it was 102 in 2018. Tito Joseph, programme coordinator of WPSI, which works for wildlife crime enforcement, says poaching and seizure of body parts of tigers had slightly increased since last year.

The difference in NTCA data may be due to non-inclusion of figures derived from seizure of body parts. “We calculated the number of tigers depending on seizures, which may not necessarily belong to one individual only,” Joseph said.

For example, in Maharashtra official figures record deaths of 18 tigers but it doesn’t include three tigers poached in Tumsar range under Bhandara division in July 2019. The arrested accused confessed they killed three tigers there. This may be the case elsewhere.

“There are certain corrections which will be communicated to the headquarters after verification from divisions concerned. Some mortalities were not communicated by states to the NTCA,” NTCA officials said. “As far as Tumsar tigers were concerned, the number has been split in MP and Maharashtra as some body parts were seized in MP,” they said.

Of the 110 deaths in 2019, 38 were attributed to body parts seizure and poaching, 26 were found dead, 36 died due to infighting, three due to road/rail accidents and six during rescue. “Improving intelligence-led enforcement, addressing impact of linear intrusions and conflict management can help keep viable populations of tigers,” Joseph said.

The year saw a marginal drop in number of leopard deaths. Though NTCA doesn’t have a database on leopard deaths, WPSI data shows in 2018, 500 leopards had died countrywide which included 169 due to poaching. There was no let-up in poaching of leopards in 2019 too as 127 of 491 deaths were attributed to this reason.

Maharashtra this year accounted for 97 leopard deaths. As many as 31 of these were in road and rail accidents.