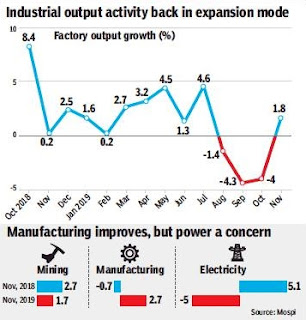 India’s industrial production expanded at a modest pace in November, reversing three consecutive months of contraction, but many sectors remained in the red.

Industrial growth, as measured by the index of industrial production, rose 1.8% in November compared with a 3.9% contraction in October, aided by a sharp growth in intermediate goods and a favourable base effect. IIP had risen 0.2% in November 2018.

The data is consistent with the slight pickup in the economy expected in the second half. Official estimates released by the government earlier this week showed GDP is likely to grow 5% in FY20, the slowest pace in 11 years. Given that expansion was 4.8% in the first half, second-half growth should be 5.2%.

13 out of 23 industry groups reported growth in the month.

Output contracted in four of the six sectors among use-based classifications. The intermediate goods sector grew by a sharp 17.1% while consumer non durables, an indicator of rural demand, was up 2%.

Production of capital goods, an indicator of investment activity, shrank 8.6%. Capital goods production has declined 11.6% on year in April-November. Production of consumer durables, a reflection of urban demand, contracted 1.5% in November, highlighting the underlying weakness in consumer sentiment toward big-ticket items, while that of primary goods shrank 0.3%.