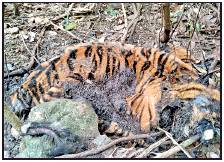 A fourth tiger was found dead in four days in Goa after the discovery of a cub buried in a forest on Wednesday. Forest officials also found the carcass of the mother tigress in a decomposed condition a few metres away.

Though forest officials said the tigers were most probably killed after feeding on a poisoned buffalo, postmortem carried out on three of the tiger carcasses have shown no evidence of death due to poisoning. “There is possibility that the tigers died due to poisoning, but so far we have not found evidences. Our investigation is in process. After forensic reports are available, reason for the death of the tigers would be known. On Thursday, postmortem of the fourth tiger will be carried out,” deputy conservator of forests Vikas Desai said.

After Dr Harsh Bathini conducted the autopsy of the female cub and the mother tigress on Wednesday, it was reported that all the claws and teeths were intact. In an earlier case, tiger carcasses, claws had been found missing. Police officials, too, were involved in the investigations, with the dog squad being brought at the spot where the tiger carcasses were found inside the Mhadei Wildlife Sanctuary. But as a week had passed since the deaths, the dogs could not help provide any leads.

The reports of four tiger deaths are unprecedented in Goa and has left wildlife conservationists and residents of nearby areas in shock.

Speculation is rife that the recent killing of domesticated animals in the area could have led to the tigers being poisoned. A case has been registered against unidentified persons under the Wildlife Protection Act and four suspects have been rounded up.

“The Goa government does not have any concrete plans in place for protection of the tigers in the Mhadei Wildlife Sanctuary. On December 23, a tigress with three cubs were captured by a camera trap. Earlier, on December 22, a cow from the nearby settlement had been killed and, on December 30, a buffalo had been killed. In this scenario, officials should have planned a strategy to avoid anguish of the locals,” said Amrutsingh, who heads animal rescue squad.

Last year, the Wildlife Institute of India census had reported the presence of three tigers in the Goa corridor. Forest officials later said that the tiger number was up to five in the Goa corridor, based on the tigers captured on the camera trap, after the census period. Meanwhile, health minister Vishwajit Rane, who represents Valpoi constituency of Sattari taluka in the assembly, has demanded investigation by a central team into the deaths of tigers.