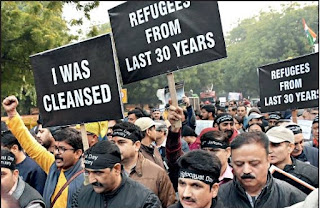 To mark the completion of their 30 years in exile, hundreds of Kashmiri Pandits gathered at Jantar Mantar on Sunday evening. The protest was part of “Holocaust Day”, being observed by the displaced community who were forced to flee from Kashmir to Jammu and other states in the early 90s soon after the outbreak of militancy.

“The government should immediately come out with a blueprint for the return of the community to Kashmir with honour and safety. The community should be declared internally displaced,” a 50-year old man, who didn’t want to be named, said. He said his house was burned down in front of his eyes and the women in his family were kidnapped and raped.

Talking of his trauma, he said his family had an ancestral bungalow in Kashmir and ever since they moved to Delhi in 1995, they had no option but to stay in a one room rented accommodation. There are six remaining members in his family.

There were others in the gathering who said they had been scarred for life.

“We are educated people. Yet, we have jobs that pay us nothing more than Rs.20,000 a month,” said another protester, Ankur Kaul. “I was 13 when I saw my house being set on fire. We were told to leave Kashmir or face a worse fate. We were left with nothing,” he said, adding: “When my family realised that the women’s lives and dignity were at stake, we decided to move to Delhi. There is nothing worse than being a refugee in your own country.”

Anil Bhat was in his thirties when he came to Delhi. “Most of us are still in depression. We want to return to Kashmir, but that’s possible only if the government promises us security and rehabilitation,” he said. “We were asked to either convert or leave. We chose the latter,” he added.

Among those who were shouting slogans seeking their rehabilitation was Ritik Jotshi, whose family migrated from their ancestral Brahman Mohalla village in Anantnag district of south Kashmir. Jotshi said he was hopeful of making it back to his village to lead a life of dignity.

“This is the first time that I am joining a protest. We want the government to come out with a road map for our return and rehabilitation in the Valley without further delay,” Jotshi said. “I had visited my ancestral village for a few days after birth, but the desire in my heart to live on my land remains alive,” he added.

The protest was organised by All State Kashmiri Pandit Conference. A delegation, led by its president Ravinder Raina, later submitted a memorandum to LG of J&K, G C Murmu.

Meanwhile, to show solidarity with Kashmiri Pandits, anti-CAA activists — on protest for over a month — observed two-minute silence at Shaheen Bagh on Sunday, an agency report stated.