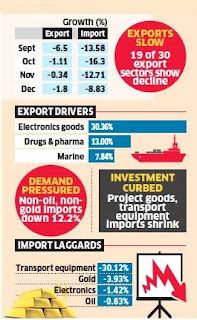 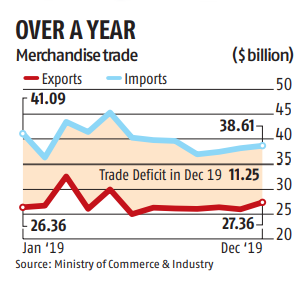 India’s exports declined 1.8% in December to $27.36 billion, on the back of currency volatility and fluctuation in commodities prices coupled with the sluggish global economy.

Exports had declined 0.34% in November.

Echoing the general economic sluggishness and weak domestic demand, imports witnessed a sharper decline of 8.83% at $38.61 billion in December.

This helped narrow down the trade deficit to $11.25 billion last month from $12.12 billion in November.

Non-oil non-gold imports, an indicator of the strength of domestic demand, contracted more steeply at 12.2%.

The decline was driven by industrial inputs such as iron and steel, coal, minerals and ores, and metals, transport equipment, electronic goods and silver.

As for exports, it was the fifth straight month of contraction. It is in line with the slowing Indian economy that is expected to grow at a 11-year low of 5% in 2019-20.

As many as 19 of the 30 exporting sectors reported a decline in outbound shipments last month. Electronic goods, drugs & pharmaceuticals, marine products, readymade garments and cotton yarn were the major commodity groups that showed growth, the commerce and industry ministry said.