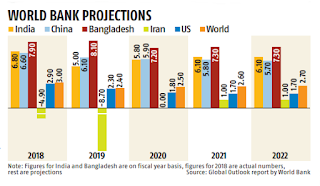 The World Bank cut India’s growth for financial year 2020 to 5% from 6% estimated earlier, a day after the country's statistics office pegged growth in the current financial year at 5%, the lowest in 11 years.

The multilateral lender expects the country’s growth to recover only slightly to 5.8% in the next fiscal year.

The bank’s Global Economic Prospects report released on Wednesday cited a lingering weakness in credit from non-banking financial companies as the main cause for the downgrade.

This is the slowest growth forecast since the 3.1% rate recorded in financial year 2008-09 when the global financial crisis had derailed the economy.

The World Bank’s latest update is also in line with the Reserve Bank of India’s October policy estimate in which it slashed the economy’s expected growth to 5% this fiscal year.

Global economic growth, is expected to rise to 2.5% in the current calendar year, underpinned by a gradual recovery in investment and trade from last year’s significant weakness, although downward risks persist, the report said.

Growth in advanced economies is likely to slip to 1.4% in calendar year 2020, in part due to softness in the manufacturing sector. Growth in the US is expected to ease to 1.8% due to tariff increases, while weak industrial activity will bring down the Euro region’s growth to 1% this calendar year, the report said.

On the other hand, growth in the emerging markets and developing economies is expected to accelerate this year to 4.1%. However, this rebound is not broad-based as the assumed improvement in performance is likely to come from a small group of large economies.

In comparison, the report forecasts Bangladesh’s growth to ease to 7.2% for the fiscal year ending June 30 for the country, while Pakistan and Sri Lanka’s growth rates are expected to rise to 3% and 3.3%, respectively, in FY20.

It also estimates growth to rise to 5.5% for the South Asian region as a whole in calendar year 2020, on the assumption of a modest rebound in domestic demand and accommodative policy in India and Sri Lanka. The report also cites improved business confidence and support from infrastructure investments in Afghanistan, Bangladesh, and Pakistan for the expected uptick.