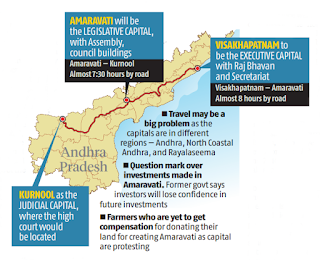 Chief minister YS Jagan Mohan Reddy’s cabinet approved a proposal to have three capitals for Andhra Pradesh, amid protests by thousands of farmers of the Amaravati region and by Telugu Desam Party.

Hundreds of farmers were taken into custody by the police in Amaravati when they attempted to lay siege on the assembly where a special session was convened to pass the Bills on capitals. The government has proposed to retain Amaravati as the legislative capital, while making Visakhapatnam the home for executive and Kurnool the judicial capital.

Farmers of Amaravati had pooled around 34,000 acres for the capital city following a call by Reddy’s predecessor, N Chandrababu Naidu.

TDP Lok Sabha member Jayadev Galla was among those who were arrested in Amaravati along with the farmers. The police also took into preventive custody several opposition leaders including another TDP MP, Kesineni Nani.

“The logical solution would be to lay emphasis on distributed development and decentralised administration to ensure that the fruits of the socioeconomic progress are enjoyed equally by people of various regions,” said the Bill placed before the assembly for its approval.

The YSR Congress government has decided to offer financial packages to the farmers of the Amaravati region who had pooled the land for the capital city construction.

The ruling YSR Congress has 151 MLAs in the 175-member assembly, while the TDP has 23. But TDP has a majority with 28 members in the 58-member legislative council, where the YSR Congress has just 9 members with the balance being distributed among other parties.

On the advice of speaker Thammineni Sitaram, the assembly decided on a probe into alleged large-scale irregularities and insider trading over land transactions in Amaravati, before the then TDP government selected it for the capital city.

The TDP countered the allegation and demanded a judicial probe, not just into land deals in the Amaravati but also in Visakhapatnam during the past eight months of the YSR Congress regime.