In passenger vehicles, an easing in the pace of decline in December, though on a low base, and an improvement in the rolling average in the last three months of the year led the industry to suggest that the worst may be over.

Sales across the automobile sector, from passenger vehicles and commercial vehicles to two- and three-wheelers, fell 13.8% to 23.07 million units in 2019, as per data released by the Society of Indian Automobile Manufacturers. Passenger vehicle and two-wheeler sales fell the most since the industry started reporting the numbers, by 12.75% to 2.96 million and 14.19% to 18.57 million units, respectively, last year. The fall in commercial vehicles was the most in six years at 15%, to 854,759 units.

Slowdown in the broader economy and weak consumer sentiment continue to impact fundamental demand, he added.

A sharp increase in acquisition costs due to higher insurance premium and implementation of stringent safety rules hit two-wheeler sales. While sales of scooters dropped 16.03%, those of motorcycles fell 12.92%. 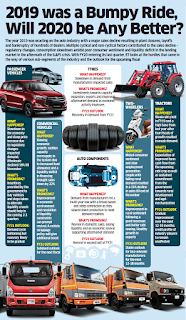