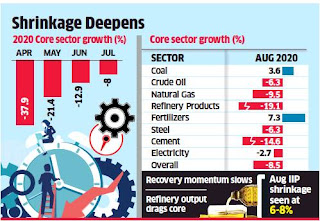 India’s core infrastructure sector shrank for the sixth straight month in August with slightly bigger contraction than the month before, confirming flattening of recovery in the month.

During the April-August, the core sector contracted 17.8%.

The eight core industries together have a 40% weight in the Index of Industrial Production, suggesting somewhat comparable contraction in industrial production.

Subsequent high frequency data, though, have shown that economy has picked up pace in September.

Fertiliser production grew 7.3%, faster than 6.9% in July and coal output rose 3.6% after four months of contraction, benefitting from a mild improvement in the offtake levels as well as the favourable base effect. Pace of contraction deepened in electricity.

Cement and steel displayed contrasting trends in August with heavy rains arresting construction activity, even as inventory restocking in the auto sector boosted steel demand. Steel output shrank 6.3% while cement production was down 14.6%.

The production of eight core sectors had declined 0.2% in August 2019.

The government has also revised contraction in May output to 21.4% from 22% estimated earlier.