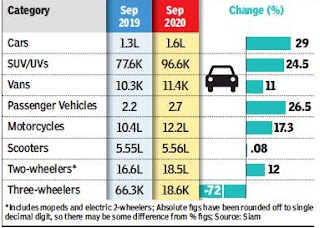 However, commercial vehicles sales saw a dip of 20% at 1.3 lakh units in the quarter under review as compared with 1.7 lakh units in July-September 2019. Vehicle sales across categories during the second quarter declined marginally to 55.9 lakh units as against 56.5 lakh units in the same period of the previous fiscal. Companies are pinning their hopes on the festive push. Demand has been challenging this year as factors like economic slowdown and job losses in metro towns have kept a large number of buyers away.

Companies say some signs of positivity are being noticed. Toyota was the only notable company to have witnessed a decline in year-on-year sales in September (-20%), while others such as Maruti Suzuki, Hyundai and Honda Cars grew by double digits. For Tata Motors and Kia, the numbers grew by162% and 147% respectively on the back of new models. On the two-wheeler side, Hero Moto, Honda and Royal Enfield reported growth.

Maruti, however, cautioned that the growth needs to be seen with the context that last September was a “low base” period. Companies say that any credible recovery will only be confirmed once the festive demand and trends are clearer.