Mumbai: Plan for 4 Metros to converge at 2-deck Kanjurmarg depot 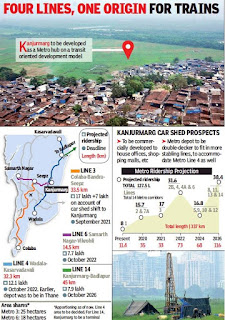 From an unviable proposition until recently, the Kanjurmarg site for the Metro depot is set to become perhaps the city’s biggest Metro hub. After the recent announcement that the car shed will be common to both Metro Line 3 (Colaba-Seepz) and Line 6 (Samarth Nagar-Vikrohli), MMRDA is now considering shifting the car shed for Line 4 (Wadala-Kasarvadavali) also to Kanjurmarg. Besides this, the terminal station for Line 14 (Badlapur-Kanjurmarg) will be located at the site.

On Wednesday, MMRDA held a meeting to discuss the transit-oriented development model for Kanjurmarg. “We have 102 acres and it is absolutely feasible to have multiple car depots on this land. The proposal is to have a double-decker car shed so that we can have more stabling lines for the various Metro routes,” said a senior MMRDA official.

Sources said MMRDA is facing issues in acquiring the land at Kasarvadavli, Thane, for the Line 4 car depot. “The cost of land alone is Rs.2,000 crore. If we were to develop it at Kanjurmarg, it would cost us Rs.500 crore. Besides, there are no issues of land acquisition,” said sources.

“In 5-6 years, Kanjurmarg will become the interchange zone for Metro lines and if you look at the routes, then commuters from the distant suburbs of MMR like Badlapur and Ambernath can come here and board another Metro, either to south Mumbai or to the western suburbs and this holds true for residents of south Mumbai and the western suburbs as well. Through one site, we shall be able to provide easy connectivity to different parts of the city,” said an official.

Sources said that apart from connectivity, the site will also be commercially developed, providing for offices and shopping malls. “The consultants for the Garibaldi Metro station in Milan are also consultants to the MMRDA for the Metro projects. MMRDA has sought their help on creating a metro hub at Kanjurmarg,” said an official.

Supporting the plan, activist and architect Nitin Killawala said MMRDA could achieve full connectivity for the entire city if Line 7 (Dahisar-Andheri) is extended and the airport’s international terminal is connected to Line 3 at Seepz. “People can then travel to Dahisar from anywhere by Metro.”