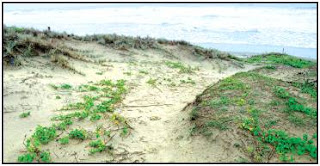 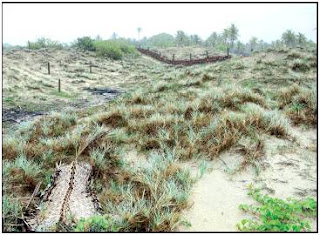 It is not uncommon to find videos online of tourists or locals driving their vehicles on the state’s beaches. Many beach stretches are suddenly devoid of vegetation. In places where there is some greenery, visitors are often seen trampling it or discarding trash there.

This sand dune ecosystem, so far neglected, is set to get a new lease of life in Goa. World Bank has approved a project proposed by the Goa state biodiversity board that will see India’s first sand dune parks and interpretation centres developed along select stretches.

Around Rs.3 crore has been sanctioned to the state under the programme, and will see interventions like interpretation centres to educate locals and tourists on the importance of the sand dune ecosystem.

Board member secretary Pradip Sarmokadam said that the Morjim and Galgibaga beaches, known for their turtle-nesting sites, are among the stretches that will get sand dune parks.

The idea of parks to preserve sand dunes was first mooted by former NIO scientist and ex-member of the GSBB Antonio Mascarenhas, who will now act as principal investigator for the project, with Sarmokadam as co-investigator.

“Preserving sand dunes is important because they are the first line of defense from phenom ena like tsunami, tall waves, storms or high winds, which hit the coast first,” said Sarmokadam. “The vegetation on sand dunes is an important part of this ecosystem, which few are aware about. The project will also see us regularly monitoring flora and fauna on sand dunes.” He added that the project is part of the effort to create Goa’s integrated coastal zone management plan.

He also said that consultations between the Morjim biodiversity management committee with stakeholders has already begun on the project.

“We observed in Morjim that there was trash thrown in the vegetation, besides uncontrolled footfalls on it,” Sarmokadam said.

“Visitors were unnecessarily stepping on areas they could avoid. Under the programme, interpretation and thematic centres will be developed where visitors will be educated and sensitised about the importance of the sand dune ecosystem,” he added.

He also said that BMCs would act as nodal agencies to help restore degraded sand dunes, and this will ensure the involvement of local stakeholders so that the projects’ benefits continue much after the World Bankfunded programme ends.