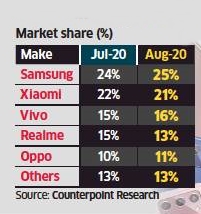 Samsung has recaptured the top position in the Indian smartphone market for July and August, driven by the Korean company’s aggressive online sales strategy to leverage the opportunities provided by anti-China sentiment in certain sections in the country.

As per Counterpoint Research data, Samsung had a 24% market share in July and 25% in August. Xiaomi, which held the top position in the Indian market for about two years, had a 22% share in July, which slid to 21% in August.

Samsung’s market share in July-August was its highest since 2018, when China-based Xiaomi displaced it as the country’s top smartphone brand. The company was pushed to No. 3 by Vivo, another Chinese brand, in the two quarters through March 2020, before it started to recapture the lost ground in the April-June period when the Chinese brands suffered mainly due to supply issues.

Samsung, which is present across all price points, has leveraged the anti-China sentiment starting June, said industry watchers.

Soon after the lockdown eased, Samsung ramped up the production quicker than rivals and was able to maintain a stable supply in the market.