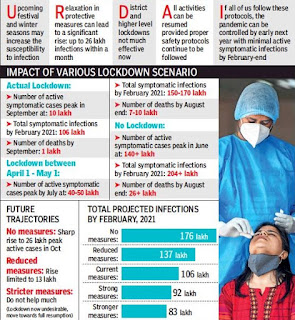 The number of active, symptomatic Covid-19 cases in India has already peaked at around 10 lakh on September 17, a government expert committee’s report said on Sunday. The cumulative caseload may reach 1.06 crore, with negligible growth by February-end, signalling a consistent downturn, the panel, comprising scientists from IITs, IISc Bengaluru, ISI Kolkata and CMC Vellore, added.

This means the pandemic can be controlled by early 2021with “minimal active symptomatic infections” in February.

Releasing the report based on a mathematical model, the panel, appointed by the ministry of science and technology, said the projections wouldn’t hold if practices like wearing masks, disinfecting places, contact tracing and quarantine rules are not followed.

The Covid-19 curve would depend on these factors apart from states testing and implementing containment protocols, it said. India has reported around 75 lakh cases and the report’s findings would indicate an addition of around 26 lakh cases. The active cases add up to around 7.8 lakh, well below the 9-10 lakh cases in mid-September. India’s cumulative positivity rate is 7.95% and it stood at 6.37% on Saturday.

The panel found 30% of India’s population projected to have antibodies as against 14% in August-end. This is at variance with the ICMR sero survey that indicated 7% antibody prevalence in August-end. Which of the two estimates is more correct may have a bearing on how far the committee’s findings pan out.

“This number being at 30% of the population with antibodies at the moment is good news as that is the explanation for the downturn in this pandemic. The other point is that cumulative mortality is projected to be less than 0.04% of total infected,” said Prof M Vidyasagar of IIT Hyderabad who headed the panel.

“We can’t relax because this nice downward trend will continue only if we continue with the protective measures,” he said. As per the panel, India reached its peak four days earlier than the projection (September 21) made by this ‘Covid-19 India National Supermodel’. But without preventive measures, cases can rise by 26 lakh in a month, it said.

“If there was no lockdown, we would have had a peak that was 15 times higher in the middle of June, which would have been overwhelming for the country to cope with. By enforcing the lockdown in March, we not only reduced the load on our system but also pushed the peak to September from the projected May-end,” he said.