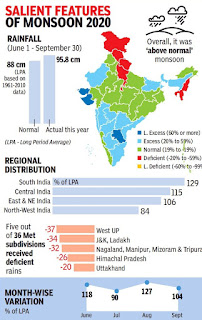 The distribution of seasonal rainfall was, however, not uniform this year. The country recorded the highest 127% of LPA rainfall in August while July was a deficit month with 90% of LPA. With the surplus rainfall in June, August and September, the country also recorded an all-time high acreage. Based on it, the Union agriculture ministry has set a record target of 301million tonnes of foodgrains for the 2020-21 crop year.

The IMD’s first stage forecast for the seasonal rainfall over the country as a whole, issued in April, was 100% of LPA with a model error of ± 5% of LPA.

The forecast was, however,upgradedto102%of LPA with a model error of ± 4% of LPA in the IMD’s update in May end.

The IMD also predicted a probability of 65% of monsoon rainfall to be ‘normal’ to ‘above normal’.

The actual seasonal rainfall for the country as a whole was 109% of LPA, which is more than the predicted value and thus turned out to be very positive for the kharif (summer sown) crops.

The monsoon started retreating from western parts of north-west India on September 28 against the normal withdrawal date of September 17 with a delay of around11days.