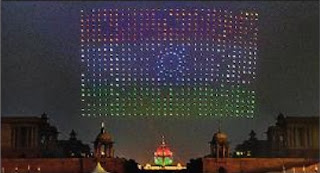 The Indian start-up, which is set to mesmerise the audience at the Beating Retreat ceremony on Saturday with a drone light show by a swarm of 1,000 drones, came up with the challenge to develop the technology in just six months after getting financial support from the government.

Botlab Dynamics, led by IIT alumni, was given an initial seed fund of Rs 1 crore for R&D and subsequently Rs 2. 5 crore for scale-up and commercialisation by the science & technology ministry’s technology development board to develop the first-of-its-kind technological project in the country.

Union S&T Minister Jitendra Singh, who met the engineers and team members of Botlab at his Delhi residence on Friday, said India will become the fourth country after China, Russia and the UK to carry out such a largescale show with 1,000 drones. He felt proud the technology was developed within the country and comprised indigenous development of all necessary components, including both hardware and software such as the flight controller (brain of the drone), precision GPS, motor controller and ground control station algorithms.