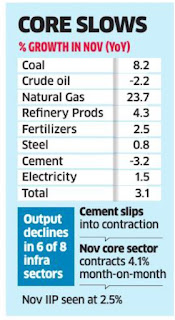 India’s core sector growth slipped to a nine-month low in November following a broad-based moderation in key infrastructure sectors and a sequential decline in output over October, data released by the commerce and industry ministry showed.

The index of eight core industries expanded 3. 1% year-on-year in November compared with October’s growth of 8. 4%, revised from 7. 5%. However, it contracted 4. 1% month-on-month.

“Core sector growth deflated to a lower than expected 3. 1% in November from the revised 8. 4% in October, adding further evidence that the momentum slackened after the festive season amidst supply disruptions in parts of southern India related to heavy rainfall,” said ICRA chief economist Aditi Nayar.

Fertiliser output rose 2. 5% in November compared with 0. 04% in October--the only sector with sequential growth as rabi sowing progressed. Coal output rose 8. 2% year-on-year against 14. 7% in October and 3. 3% in November last year. Crude oil output contracted 2. 2%, the same as in October. The production of natural gas increased 23. 7% while refinery output expanded 4. 3%. Electricity generation rose1. 5%.

Cement output slipped into contraction with a 3. 2% decline from a year ago and the sharpest month-on-month fall of 21. 1%. Steel output grew a modest 0. 8% from the same period last year, suggesting some slowdown in construction.

The core sector makes up 40% of the Index of Industrial Production, making it a lead indicator of industrial activity.