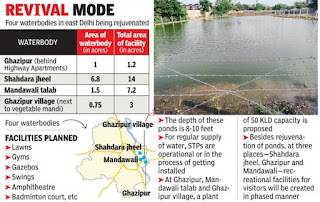 East Delhi Municipal Corporation has intensified the development work of waterbodies at Ghazipur (Highway Apartments), Shahdara Jheel and Mandawali and they are expected to be completed by April-end. Revival work on a fourth waterbody in Ghazipur Village (next to the vegetable mandi) has been completed through CSR funds.

A proposal has been made for installing sewer treatment plants at all four ponds for regular supply of treated water. For other beautification work, EDMC has approached the elected representatives and the Centre to raise funds.

While Rs 3 crore has been approved from MPLAD funds for Mandawali and Ghazipur (Highway Apartments) waterbodies, development of Shahdara Jheel is being done through the AMRUT scheme of the central government. “The initiative is being taken up on the directions of National Green Tribunal. As we have four major ponds in our jurisdiction, we have chalked out a plan to dig and revive them,”’ said EDMC horticulture director Raghwendra Singh.

Shahdara Jheel has been rejuvenated and a phytorid technology based STP with a capacity of 30 lakh litres water per day has been installed there in the first phase. “The STP plant fills the 6. 8 acre lake, with an average depth of 2. 5 metres, with treated water on a regular basis. At present, work on phase-II of the project is in full swing. This includes tasks related to horticulture, electrical and engineering departments,” said the official. The pond is expected to be inaugurated on Tuesday.

At Ghazipur Village, the horticulture department has filled the pond with rainwater. “The waterbody is spread across around one acre of the three-acre park. Last year, we revived the pond during monsoon with the help of an NGO. We dug the area and cleaned the site properly before filling it with rainwater,” Singh said.

For the 10-feet deep waterbody next to Highway Apartments, the corporation is expecting Rs 1. 94 crore from MPLAD funds. “We have received the nod from MP Gautam Gambhir and prepared a detailed project report, which includes installation of an STP of 50 KLD, construction of a boundary wall, footpath and grilles. At least four high-mast lights, eight types of children’s playing apparatus, gym equipment, etc will be installed,” said an official.

At Dr Hedgewar Talab Park in Mandawali, work is on for developing a recreational space-cum-sports facility on seven acres of land located in the middle of the congested colony. The place will be thrown open to the public on February 28. “We started work after receiving Rs 1. 05 crore from Gautam Gambhir’s MPLAD funds. Work on developing badminton and basketball courts, green lawn and separate playing area for children will be started later,” said Singh.