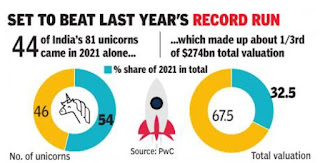 More than 50 startups in India show the potential to enter the unicorn club in 2022, says a new total India tally to well beyond 100 startup unicorns (those that are valued at over $1 billion each).

Amit Nawka, partner (deals & startups leader) in PwC India, which conducted the study, said, “We can see that the base of the companies in growth-stage and late-stage deals have improved significantly in calendar year 2021, depicting a stronger base of companies having the potential to reach unicorn status. With market sentiments favourably inclined towards startups, and the large base of scaled startup companies at the end of CY21, we expect the startups’ unicorn tally to go well beyond 100 by the end of 2022. ”

India is home to 81 unicorns as of now, with a total valuation of $274 billion. Of these, 44 unicorns with a total valuation of $89 billion were born last year, shows the national investment promotion agency. Indian startups had a blockbuster 2021 with approximately $35 billion raised across 1,000 rounds. The PwC report said that in the fourth quarter, startup funding crossed the $10-billion mark.

Globally, 510 new unicorns emerged in the last calendar year, which was about 30% more than all five previous years combined. Almost 55% of all new unicorns are based in the US.

In 2021, close to 250 M&A transactions happened in the startup ecosystem, which is a big jump from earlier years. M&As were fuelled by new business models, with large startups acquiring capabilities and market presence, and large corporabets — notably the Tata and Reliance groups.