Sindhutai Sapkal, Mai of orphans, passes away at 74 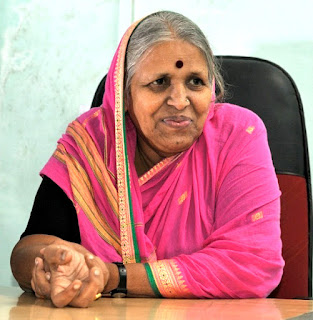 Social worker Sindhutai Sapkal moulded her incredible life from personal setbacks to care for thousands of abandoned orphans, giving them food, a roof and hope.

The celebrated social worker and activist, who was honoured with a Padma Shri in 2021, died on Tuesday at the Galaxy Care Hospital in Pune. She was 74.

Sapkal was undergoing post-operative care after a diaphragmatic hiatal hernia surgery at the hospital on November 25. Her death was mourned on social media by politicians cutting across divides.

“Her left lung had collapsed due to diaphragmatic hernia that she suffered from for more than five years. She was recuperating post-surgery. However, her condition started worsening after the lung infection she developed five days ago for which she was put on non-invasive ventilator support. She suffered a massive heart attack and died at around 8. 10pm on Tuesday,” Sapkal’s treating doctor Shailesh Puntambekar said.

Sapkal was popularly known as Mai (mother), by the 1,500 orphaned children she had taken under her care. She also ran several orphanages across Maharashtra. Some are in Pune and its surrounding areas. She had four biological children before she was 20 and had left her marital home after suffering domestic abuse. In the early days, Sapkal sheltered at railway stations and cemeteries with her children, and took to begging to make ends meet.

Her plight made her empathize with or phans and abandoned children, whom she then took under her wing and thus began a lifetime of work caring for them. She also worked with adivasi communities for their welfare, even confronting then-Prime Minister Indira Gandhi to demand compensation for a family attacked by a bear in a tiger reserve. Her demand was promptly met with.

Some of her children carried forward their mother’s work in children’s welfare, including her biological daughter, with others also achieving professional success across sectors.

CM Uddhav Thackeray has directed the state administration to give Padma Shri Sindhutai Sapkal a state funeral on Wednesday in Pune. Many senior leaders paid his tributes to Sapkal.