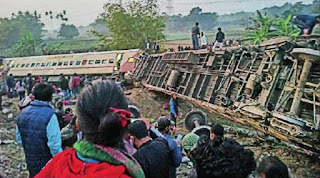 The railways reported the first incident of passenger deaths in an accident after a gap of nearly 34 months. At least five passengers on board were left dead and another 20 were injured as 12 bogies of the Guwahati-bound Bikaner Express derailed in West Bengal’s Jalpaiguri district.

The last time passenger deaths were reported in an accident were in March 22, 2019. The news came as a shock to the rail ministry headquarters and shortly after the railway board ordered a high level investigation by the commissioner of railway safety. Railway board chairman V K Tripathi and the director general (safety) rushed to the spot. Union railway minister Ashwini Vaishnaw also left for the site to take stock of the situation.

Vaishnaw announced enhanced ex gratia relief of Rs 5 lakh for death, Rs 1 lakh for the grievously injured and Rs 25,000 for simply injured persons. Officials said the reason for the derailment was unclear and detailed investigation will reveal the exact cause of the fatal accident.

In February last year, then Union railways minister Piyush Goyal had informed the Rajya Sabha that not a single passenger death had occurred due to train accidents a fter March 22, 2019.

The achievement of zero passenger death in 2019-20 was hailed as the first such achievement by the national transporter in its 166-year long history.

The railway s keep a record of all the deaths that occur on its premises under three separate heads consequential accidents, trespassing and untoward incidents – and the passenger death due to derailment, collision or any other fault are recorded as fatalities in consequential accidents. Incidents like people run over after coming on the tracks or deaths caused because of people standing on the footboard of trains or hanging out of trains are recorded as trespassing and untoward incidents.