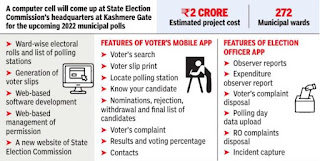 From checking voter registration to knowing about the candidates in the fray or locating a polling station on an inbuilt map, Delhiites will be able to do all this and more during the upcoming municipal elections thanks to the “Nigam Chunav Delhi” mobile app. This is a part of one of the many digital steps being taken by the State Election Commission.

SEC is responsible for the preparation of electoral rolls and conducting municipal elections. Located at Nigam Bhavan in Kashmere Gate, it has started the process of setting up a computer cell for the polls. It will also develop a new and improved website.

The commission is going to engage a reputed firm to set up the cell, provide help with preparation of electoral rolls, develop a web-based software, provide software training to electoral officers, and assist SEC even after the process is closed. The firm would also help in launching the poll app for voters, apart from a separate app for election officers.

The voters’ app would have modules like search, voter slip, locating polling station, information about candidates, nominations, rejections, withdrawal and final list of those in the fray. Voters would also be able to submit complaints and get other details, like contact numbers and regular updates from SEC.

The first responsibility of the firm would be preparation of ward-wise electoral rolls, apart from draft and final list of polling stations and generation of voter slips in PDF format. It would also develop the web-based software and implement all election-related works.

The EVM inventory would be available on a web portal. The entire process from receiving EVMs to disbursal to returning officers after randomisation, transfer to the strong room and receiving it back would become even more efficient. The reports of the election with all details would be prepared and the firm would assist SEC even after polls are over for extracting information from the system.