Chennai: Metro work on IT corridor to begin soon 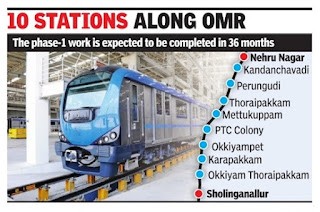 Metro train ride to the IT hub on Old Mahabalipuram Road may become a reality in about three years as construction of a 10km elevated corridor between Nehru Nagar and Sholinganallur is likely to begin soon. Chennai Metro Rail Limited recently awarded the contract to Larsen & Toubro to construct the elevated section with 10 stations within a period of 36 months. The contract to construct the remaining portion on OMR from Sholinganallur to Siruseri SIPCOT covering 10km is yet to be awarded. The 118.9 km phase-2 is expected to be ready by 2025. Officials said the contract awarded last week for the Nehru Nagar-Sholinganallur line includes building an elevated viaduct from a ramp south of Taramani Link Road up to Sholinganallur which is an interchange station. It also includes construction of 10 elevated stations at Nehru Nagar, Kandanchavadi, Perungudi, Thoraipakkam, Mettukuppam, PTC Colony, Okkiyampet, Karapakkam, Okkiyam Thoraipakkam and Sholinganallur.

“We have divided the corridors across phase-2 into smaller sections and are awarding contracts to complete construction faster. Therefore, if there arises an issue in one section, it won’t affect the other lines of phase-2,” an official said. The OMR line is part of the 45.8km corridor-3 from Madhavaram to Siruseri SIPCOT.

Earlier, CMRL cancelled the tenders floated for the OMR line as the corridor was redesigned. The elevated viaducts was initially planned on level two with the elevated IT expressway below. However, in a step to cut costs, CMRL redesigned the plan to build the elevated metro line on level one through the centre of the road on OMR with the expressway road on either side of the metro viaducts. After the redesign, tenders were floated again.

When the OMR line opens, commuters from the north, west and southern suburbs can reach the IT hub without the hassle of waiting in long signals and wading through busy road traffic during peak hours.

Sholinganallur, which is an interchange linking corridor-3 and 5, and Alandur, which is part of corridor-5 and has an intersection with existing phase-1 station, will be the stations to switch corridors for OMR residents to reach transport hubs like the airport, Central and Egmore station and CMBT bus terminus or arterial roads like Anna Salai and Poonamallee High Road.

OMR residents could take a direct train to Madhavaram, switch corridors at Thirumayilai to reach the shopping hub at T Nagar, and switch lines at Sholinganallur to reach the IT hub at Porur.