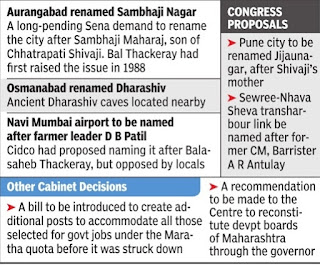 The renaming, moved by the embattled Shiv Sena on Wednesday, came as a surprise as Congress and NCP have been against the move. Senior officials said the changes would have to be approved by the Centre to become official. When the cabinet meet was held, the Supreme Court was yet to allow the floor test, and officials said Sena’s decision to take these up despite the well-known opposition of Congress and NCP was perhaps a last-ditch effort to show it is committed to the cause of Hindutva and fulfilling its promises.

Congress ministers on Wednesday raised the demand of renaming Pune city as Jijaunagar, after Shivaji’s mother, and naming the Sewree-Nhava Sheva transharbour link after former CM, Barrister A R Antulay. It also backed D B Patil’s name for the Navi Mumbai airport. No decision was taken on the first two proposals. State planning agency Cidco had earlier proposed to name the airport after late Balasaheb Thackeray, which was opposed by locals leaders and villagers. In 1988, when Shiv Sena expanded beyond Mumbai, Thane and won the local body elections in Aurangabad, Bal Thackeray had announced that it would be renamed Sambhaji Nagar. “It is a historic day for us. CM Uddhav Thackeray has shown the power of Hindutva. Why should a city in Maharashtra be named after Aurangzeb who tortured Hindus?” said a former Sena MP from Aurangabad.

However, sitting AIMIM MP Imitiaz Jaleel criticised the decision. “When they realised their government is in danger, that is when they were reminded of Sambhaji Maharaj. What are they trying to prove by changing the name of the city, they cannot erase history with this. If he cared for the people of Aurangabad, he should have found a solution to the water crisis the city is facing. This is petty politics which does not bring any development,” said Jaleel, without naming Thackeray. The so-called secular Congress-NCP leaders should be boycotted, he added.

Apart from these proposals, the state also cleared a proposal to allot land to provide flats to residents of the government colony in Bandra. Also, the cabinet cleared the proposal to reconstitute the development boards of Vidarbha, Marathwada and rest of Maharashtra.

Shiv Sena CM Manohar Joshi had issued a notification seeking public suggestions and objections on changing Aurangabad’s name in the 90s. A Congress corporator challenged it in Bombay HC. The case went to the SC, which ordered status quo in 1996. The notification was withdrawn by the Congress-NCP government in 1999. When the MVA government was formed in 2019, Congress leaders asserted they would oppose any renaming proposal as it was not part of the Common Minimum Programme. Sena retorted Congress will make BJP happy by opposing it.

Congress said the CMP was formed for development work. On Wednesday, however, Congress did not oppose the proposal.