Pallonji Mistry Passes Away at 93 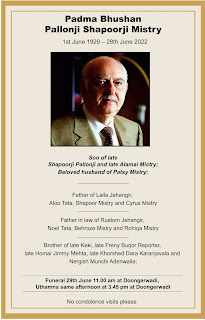 Reclusive billionaire Pallonji Mistry of the 150-yearold Shapoorji Pallonji Group has passed away on Tuesday in Mumbai.

He was 93 and is survived by his wife Patsy and children Laila Rustom Jehangir, Aloo Noel Tata, Shapoor Mistry and Cyrus Mistry. He had spent much of his time in recent years in Ireland as an Irish citizen. Pallonji Mistry was hugely appreciated for his simplicity and unpretentiousness, say SP Group old timers. "He was also a man of his word and no matter what would abide by it," said a group executive.

Pallonji Mistry was an astute businessman and quick to spot new opportunities that India’s industrialisation and growing economy presented. In early 2012, he stepped down as chairman of Shapoorji Pallonji & Co, the operating and holding company of the SP Group, and handed over the chairmanship to elder son Shapoor Mistry.

Towards the end of the 1960s, Pallonji Mistry had the incredible foresight, confidence and determination to venture abroad. Construction in the Middle East, fuelled by petrodollars, was booming. Under Pallonji’s leadership, the company bid for, and won, a tender to build the palace of sultan Qaboos bin Said al Said in Muscat.

Founded in 1865, The SP Group operates in engineering and construction, infrastructure, real estate, water, energy and financial services in 50 countries. Pallonji Mistry has been credited with building a very credible brand image for the group beyond Indian shores.

The SP Group under him has constructed some of Mumbai’s landmark buildings, including the State Bank of India and the Reserve Bank of India buildings. The company grew substantially in the later decades of the last century. He acquired strategic stakes in companies and brought them within the fold of the SP Group. These include Sterling & Wilson, United Motors, Forbes Gokak and Afcons Infrastructure.

Pallonji Mistry’s holding of 18.4% made him the largest shareholder in Tata Sons, the holding company of the Tata Group, outside the Tata Trusts.

The media shy Pallonji Mistry was called the ‘Phantom of the Bombay House’ in the group headquarters. The SP Group in 2016 had a bitter fallout with the Tata Group, over the ouster of Cyrus Mistry as the chairman of Tata Sons.

In 2016, Pallonji Mistry was awarded the Padma Bhushan, the country's third highest civilian award, for his contribution towards industry.