Civic bodies to decide penalty for plastic use 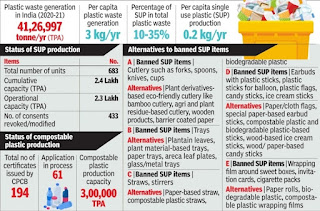 You may face a penalty for using certain identified single-use plastic items anywhere in the country from July 1 and the punitive actions, which include fines or jail terms, will be decided by the local authorities concerned. The Centre has sensitised states and Union Territories to enforce the ban on those items which not only pollute air, water and soil but also clog drains and damage the overall natural ecosystem.

Environment minister Bhupender Yadav, however, on Tuesday said the idea was not to harass the common people and the ban would be enforced with everyone’s “cooperation” with the focus on creating awareness and promoting use of alternatives.

The minister said the government had given enough time to the industry and people to prepare for the ban that would prohibit “manufacture, import, stocking, distribution, sale and use” of 19 identified single-use plastic items, which have low utility and high littering potential, all across the country with effect from July 1.

Asked about punitive action, a senior official said, “Violation of the ban will be considered a violation of Environment Protection Act which is a criminal offence. ” He noted there are instances of fines of Rs 500 or Rs 1000 for repeat offenders, depending on byelaws.