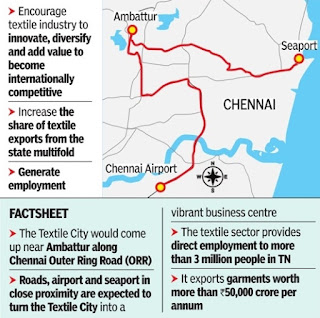 The handlooms and textiles department has commenced the process of identifying and acquiring a land parcel measuring between 50 acres and 100 acres in Chenna’s Ambattur area to establish a one-stop marketing facility encompassing the entire textile value chain. This textile city would come up along the Chennai Outer Ring Road to promote the sector.

The project, according to senior officials, would be implemented under public private partnership. The department held a couple of meetings with Chennai apparel association and other stakeholders regarding the project and received an overwhelming response. “At present, we are in the process of identifying suitable land along the outer ring road,” said a senior officer, seeking anonymity.

The project is aimed at creating marketing networks and networking infrastructure, both physical and virtual, by establishing robust IT and network initiatives and creation of large-scale marketplaces. “The upcoming textile city will have research and development facilities, wholesale-cum-export facilities, GST and customs tables to facilitate the investors for ease of doing business and enhance exports multifold. The upcoming facility will be superior in all ways than the existing textile valley in Karur, which has limited facilities,” the official added. At present, there is no proper marketing facility for the textile and clothing industry in the state, he said.

The department had a couple of informal meetings with Chennai Apparels Association and other  stakeholders and the response was overwhelming. “We will have formal meetings with the apparel and knitwear associations based in Chennai, Tirupur, Karur and other regions. As of now, we are receiving good response from them and they are keen on having such (one-stop marketing) facilities,” the official added.