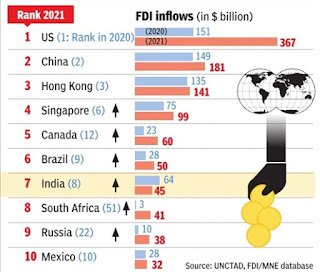 India has moved up one notch to be ranked seventh in the United Nations Conference on Trade and Development’s annual World Investment Report despite a 30% decline in foreign direct investment into the country.

During 2021, FDI inflows into India were estimated at $45 billion as large mergers and acquisitions, especially in the digital technology space, were not repeated in 2021. During the previous year, companies such as Reliance Jio received large investments from Facebook and Alphabet. But India remains the preferred destination for digital MNCs looking to invest outside the developed world with the country cornering 7% of deals due to the “thriving tech startup scene”.

But Unctad also appeared upbeat on the overall investment situation in the country. “…a flurry of new international project finance deals were announced in the country: 108 projects, compared with 20 projects on average for the last 10 years. The largest number of projects (23) was in renewables. Large projects include the construction in India of a steel and cement plant for $13.5 billion by ArcelorMittal Nippon Steel (Japan) and the construction of a new car manufacturing facility by Suzuki Motor (Japan) for $2.4 billion. ”

It also said that nearly half the R&D related investments flowing in developing countries came to India, even as 60% of such investments were cornered by developed countries. While India’s FDI inflows in 2021 were the lowest since 2018, outflows were up 43% at around $16 billion, the report said.