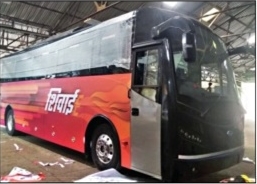 The state transport utility would operate only e-buses on the Pune-Mumbai route within next four to six months, Shekhar Channe, the vice-chairman and the managing director of MSRTC said. Christened Shivai, the airconditioned e-buses of the Maharashtra State Road Transport Corporation would cover the distance of about 180km between the two cities in approximately four hours. Their maximum speed lock is 80km per hour.

At present, a total of 90 Shivneri buses ply each day between Pune and Mumbai.

A fully charged Shivai bus can ply 300km at one go. The vehicles with 322KV batteries would take three hours to get fully recharged if they completely run out of charge.

“Additional charging stations would be set up for the ebuses along the Pune-Mumbai Expressway after assessment and studies,” Channe added.

“Some points are expected to be installed near the food mall along the expressway, where buses halt for half-an-hour to give a break to passengers. During this journey break, buses can be recharged at these points.”

The Shivai bus service would be inaugurated on June 1, marking the 75th foundation day of MSRTC. It will run between Pune and Ahmednagar. The one-way fare would be Rs.270, said a source. Another MSRTC official said the event was important considering that the transport utility recently came out of a six-month-long strike of staffers. “These buses will drastically reduce the expenses of MSRTC on fuel. MSRTC will also bring around 2,000 CNG buses into its fleet. Besides, the existing diesel buses (around
18,000) would be converted into LNG (liquefied Natural Gas) vehicles and the process has begun. By next year, we expect more than 50% of the MSRTC fleet to run on alternative fuel,” the official said.