PM Modi to Lead Event to Mark Beginning of 1,400 Projects in UP 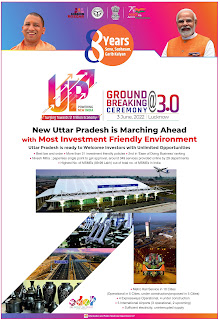 Prime minister Narendra Modi along with several captains of India Inc will attend the third 'ground breaking ceremony' organised by the UP government on Friday to mark the beginning of commercial operations of about 1,400 industrial projects representing investment of over Rs 80,000 crore,

This will be the third ground breaking ceremony being organised by the state with the government claiming the investments to generate about 5 lakh employment opportunities and is being seen to further strengthen the claim of the Yogi Adityanath government to have improved the investment climate in the state especially after the state witnessed a 12 position jump in the ease of doing business rankings in 2020, to secure the second rank in the country. The projects being highlighted have either begun their commercial operations or are on the verge of doing so. The ceremony takes place amid a continued demand for employment with the opposition also making it one of the prime points to attack the government on.

It will especially also highlight the state becoming a preferred choice for establishment of data centres with close to Rs 20,000 crore or a lion's share of 25% of the investments getting drawn to this sector owing to Noida and Greater Noida regions becoming hubs of electronic manufacturing and the state being one of the first few states to come up with a dedicated policy for investment in data centres, even as the centre is yet to pass a national policy for the same in line with it's push towards localising of data storage.

Along with PM Modi, speakers at the event include Gautam Adani, chairman of the Adani Group, Kumar Mangalam Birla, chairman of the Aditya Birla Group, Nirajnjan Hiranandani, chairman, Hiranandani group, Matthieu Eyries, vice president of French industrial gases maker Airliquide and Ananth Ambani, director, Reliance new Energy Solar with several other prominent businessmen scheduled to mark attendance. PM Modi had also attended the first groundbreaking ceremony in 2018, then in the run up to the 2024 general elections.

Seven data centre and data centre park projects are being set up by NIDP (a Hiranandani enterprise), Adani Enterprises, Sify Technologies, NTT Global and STT Global in the Noida-Greater Noida region. The state had passed a data centre policy early in 2021 aiming to develop about 250 MW of data centre capacity. Agriculture and food processing sector has received the second highest investment worth about Rs 11,300 crore with companies like AB Mauri setting up a yeast making facility in Pilibhit in eastern UP, Moon Beverages franchise partner of the Coca Cola company to set up dairy and juice making facilities as well as bottling lines. While close to Rs 60,000 crore worth of investment has been drawn towards western UP, eastern UP or Purvanchal has attracted about an eighth or close to Rs 10,000 worth of investment.