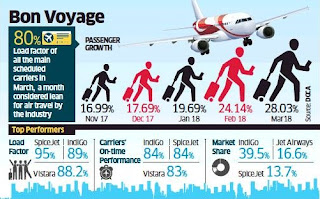 March 2018 saw 1.2 crore people flying within the country, the highest ever monthly figure for domestic air travel, that is 28% more than the over 90 lakh travellers, who did so in the same month in the previous year. Each month of the January-March quarter this year has seen over a crore of domestic flyers with so far almost 3.4 crore people travelling within India by air.

March is the sixth month in a row which has recorded crore-plus domestic traffic. January had witnessed nearly 1.2 crore domestic flyers, which is now the second-highest monthly figure. These records could have been shattered by a long margin but for a severe airport infrastructure crunch in the country’s big airports like Delhi and Mumbai, which are struggling to accommodate even one additional flight as they operate at full capacity.

The highest-ever number of March 2018 led to airlines recording very high aircraft occupancy on domestic flights, which ranged from SpiceJet’s 95% to AirAsia India’s 82% (among big airlines). While these big airlines are doing well, a cause for concern in the DGCA’s domestic air travel data released for March 2018 on Wednesday is the over 70% flight cancellation rate of Air Deccan and Air Odisha — which started regional flights recently. Not surprisingly, the maximum passengers complaints (percentage wise) according to the regulatory data was against these two airlines.