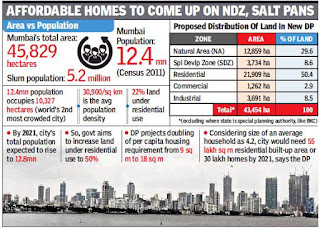 Incentives for redevelopment of private buildings and doubling the buildable area for commercial space are among the key features of Mumbai's new Development Plan, which will replace the 1991 DP.

Jointly addressing a press conference at Mantralaya, urban development secretary Nitin Kareer, municipal commissioner Ajoy Mehta and housing secretary Sanjay Kumar said the objective underlying the DP is to create eight million jobs in the new knowledge economy and 10 lakh affordable homes under the Pradhan Mantri Awaas Yojana in a metropolis struggling to cope with the demands of population growth.

Builders constructing commercial offices anywhere in the city will now get a floor space index of 5 compared to existing 2.5. FSI is the ratio of builtup area to the size of the plot.

With barely any vacant land left for construction, planners are also banking on redevelopment to do the trick. In the island city, floor space index of 3 will now be allowed for private residential societies and not just for redevelopment of old and dilapidated cessed buildings. Residential FSI in suburbs will however remain at 2.5. This comes in the wake of long years of discussion among planners on ways to “repopulate” the island city where census 2011 showed a 7-8% drop in population.

Beneficiaries of the enhanced FSI regime will include builders controlling vacant mill plots in central Mumbai. FSI for such plots is currently a little over 2.

For redevelopment of housing societies, DP offers 15% additional FSI free of cost. This, according to Kareer, will translate into “one extra room for each flat owner”.

Officials said they are hopeful that the new DP will be implemented to a large extent given the construction incentives. The rising population of the city and the low index of per capita housing—Mumbai has an average of 30,900 people per square km, making it the second most over-crowded city after Dhaka—are among reasons cited for promoting redevelopment and providing higher FSI.

Reintroducing the Transit Oriented Development, the government plans to offer higher FSI near Metro interchanges, metro/railway stations and other transport hubs. Builders redeveloping Mhada properties like old and dilapidated buildings in the island city will now require consent of only 51% of tenants instead of 70% at present. This will be applicable to cluster redevelopment projects too. Special provisions will be framed for redevelopment of Gaothans, Koliwadas and Adivasi padas too. Similarly, new rules will be framed to enable redevelopment of buildings in the airport funnel zone.