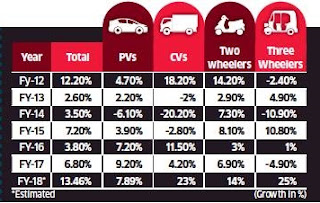 India’s automobile industry just had its best fiscal year with data from manufacturers showing all-time high sales across segments. Analysts expect the momentum to continue in the new financial year, as economic activity is improving as well.

Cumulative domestic vehicle sales growth in the past year was 13-15%, according to estimates based on data shared by industry players, hitting the double-digit mark for the first time since fiscal 2012. The two-wheeler, three-wheeler and commercial vehicle segments have each posted record double-digit growth, despite uncertainty over the implementation of GST and transition to new emission standards. In passenger vehicles, the industry is projecting a high-single-digit expansion for fiscal 2018.

The local two-wheeler market is estimated to have crossed the 20-million-unit milestone, with sales growing 14%, helped by strong demand in the rural areas after good rains last monsoon. The three-wheeler output (domestic and exports combined) likely ended the year close to the 1-million mark, with growth of more than 25%.

The commercial vehicle segment, seen as a barometer of economic activity, is estimated to have recorded sales of over 8.8 lakh units in the past fiscal year, growing 23% from the year before, with medium and heavy vehicles eclipsing the previous peak posted in FY12. Industry executives cited the introduction of GST, which resulted in free movement of goods, and other policy changes for the strong performance. The passenger vehicle segment is expected to have expanded 8% with sales of about 3.3 million units.

India has been an outperformer among leading global automobile markets in calendar year 2017.

According to data from OICA, a global dealer body, with sales of 32,27,701 units, India remained the fifth largest market for passenger vehicle sales globally, trailing China, the US, Japan and Germany. Industry observers expect the country to overtake Japan by 2020.

India had overtaken China as the largest motorcycle market in 2016.

India is the fifth largest market also for commercial vehicles, after the US, China, Canada and Japan.