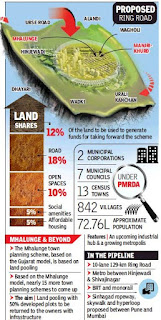 The outskirts of Pune are set for a makeover with the PMRDA willing to lay out 15 more town planning schemes within the next 18 months along the first 32 km stretch of the proposed 128 km Ring Road.

Pune Metropolitan Region Development Authority commissioner Kiran Gitte said following the approval to the Mhalunge town planning scheme, a meeting was held with villagers in Manjri Budruk villagers. “Two townships will come up in the area — one in Budruk and another in Manjri Khurd. Talks will be started with other villages for similar townships along the Satara road-Nagar road stretch,” he said.

“PMRDA will come up with 15 TP schemes be spread over 250 hectares. We have the manpower, but have to generate funds for the infrastructure through land monetisation,” Gitte said. The authority would have taken five more villages, but some of them have been included in the Pune Municipal Corporation’s jurisdiction.

The project would be based on the Ahmedabad model that saw development of 78 townships in 10 years. Gitte said the entire ring road would see nearly 50 such townships during the same period.

Among the villages considered for the townships in the first phase are Manjri Khurd, Wadachi Wadi, Avatalewadi, Holkarwadi, Wadki, Manjri Khurd and Manjri Budruk, Phursungi , Urali Devachi, Yevalewadi, Pissoli and Handewadi. Some of these villages will have two townships.

Gitte hoped that the township model here could be put on the fast track, as the real estate sector in Pune was better than the one in Ahmedabad. The township model will help these villages get a complete new look with land owners standing to get 50% of the plots in the same areas.

However, the roll-out of the project has its challenges as well. The biggest of the challenges is communication within the villages. To tide over this, PMRDA will have to raise funds through municipal bonds, loans and land monetisation for readying the infrastructure.

The schemes have been proposed to make the 128-km Ring Road project self-sustainable with planned development along it. The new schemes will be built 500m from the proposed road.

The town planning and the Ring Road projects will be developed simultaneously and they are a part of the same scheme.