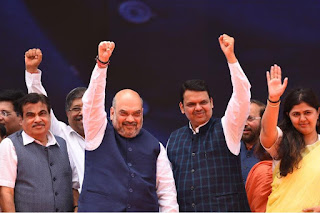 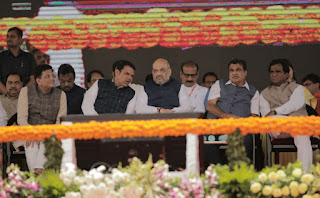 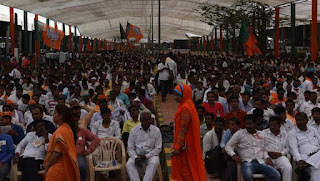 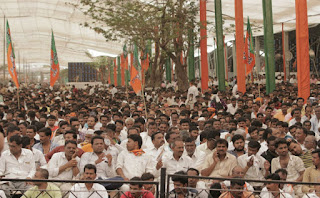 BJP president Amit Shah spoke to party workers at the BKC rally about the BJP”s “golden era” that was “yet to come.” “It will begin when the nation will give a clear mandate to the party at the Centre in 2019, and when we will win states such as Orissa and West Bengal,” he said. “The poll countdown has begun,” he declared.

Shah urged the party rank and file to go door-to-door and brief 20,000 households, in the first leg of the campaign, about the Modi government’s “good governance.” “Modiji is the world’s most popular leader and you are going to contest the polls under his charismatic leadership,” he said.He clarified BJP will not scrap reservations or the SC/ST Prevention of Atrocities Act.

Shah said 68% of India’s geographical area and 70% voters were under BJP’s spell since 2014. “We have won 11 states from the Congress in the last four years,” he noted, adding that the Modi regime’s schemes such as the Ujjwala Yojana, Jan Dhan Yojana, Saubhagya Yojana and Swastha Bharat Yojana will transform India. “Hame naya Bharat banana hai,” he stressed.

Addressing mediapersons later, he said, in response to a question about the petrol price hike, that petrol prices were yet to go beyond UPA-era levels. “We are trying to reduce petrol prices and trying to bring it under GST. We are discussing the issue with the state,” he said.