Oil on the Boil 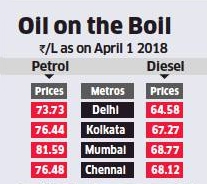 Diesel has hit an all-time high and petrol is hovering around four-year peak in the country following a rapid rise in international rates led by strong global demand and oil producers’ resolve to keep crude supply restricted for extended period.

A sharp recovery in crude oil prices, which is up 47% since July 1 last year, is estimated to have expanded India’s oil import bill to $88 billion in 2017-18 from $70 billion in the previous year. India imports nearly 82% of its oil requirement.

On Sunday, diesel was sold for record prices in all four metro cities of Delhi, Kolkata, Mumbai and Chennai. At Indian Oil outlets, diesel was priced at ₹64.58 a litre in Delhi and ₹68.77 a litre in Mumbai.