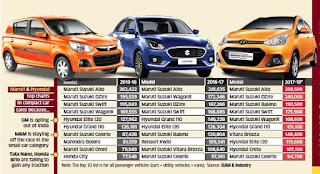 Maruti Suzuki has ended fiscal 2017-18 with a clean sweep of the top five selling passenger vehicle models in India. The company’s Alto has topped the all-India sales tally for the fiscal with 2.5 lakh units, followed by Dzire (2.4 lakh), Baleno (1.9 lakh), Swift (1.7 lakh) and WagonR (1.68 lakh).

While Maruti’s dominance in the top-10 best-selling models list is not new, this year the difference between sales numbers of the mass market entry-level Alto and the compact sedan Dzire has come down from more than 40,000 units in FY16-17 to a mere 18,415 units. While Alto, too, has grown by 7%, the reason for the reduction in sales gap is due to Dzire’s much higher growth at 20%. Indeed, the only model that did not grow in the top-5 list is Maruti’s WagonR, which saw sales dipping from 1.72 lakh units in FY16-17 to 1.68 lakh this time round.

A look at the sales tally comparison between FY16-17 and FY17-18 tells the story: Maruti Suzuki clocked the highest growth in the top-5 list in the Baleno, which grew a staggering 58% year-on-year. The second-highest growth was in Dzire sales. In comparison, older models like Swift and Alto showed modest growth. While Swift grew just 5.4%, WagonR actually contracted by 2%.

The growth patterns show the trend: Although the entry segment is still growing on the back of the Alto’s popularity, the growth spurt is much lower than what’s being totted up by the SUV and sedan brigade. Even a not-so-new Dzire has clocked a significant double-digit growth rate, showing the increasing preference for ‘bigger’ vehicles. Clearly, India still loves the hatch, but is beginning to aspire for other vehicle types like sedans and SUVs.