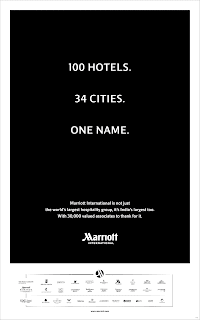 IHCL has 129 hotels in India, including its budget brand Ginger with about 14,400 rooms. However, Marriott beats IHCL in number of rooms.

Marriott's 100 hotels are roughly (equivalent to) 22,000 hotel rooms. In a landmark deal that changed the dynamics of the hospitality industry, Marriott had bought Starwood Hotels and Resorts Worldwide for about $13 billion, a move that brought together its Marriott, Courtyard, and Ritz Carlton brands with Starwood’s portfolio of brands like Sheraton, Westin, W and St Regis.

Marriott expects to open more than 50 new hotels in India and raise inventory to more than 30,000 rooms over the next few years.

The company said demand is also growing for its upscale and luxury brands. Marriott has three Ritz-Carlton projects under development in Pune, Mumbai and New Delhi.