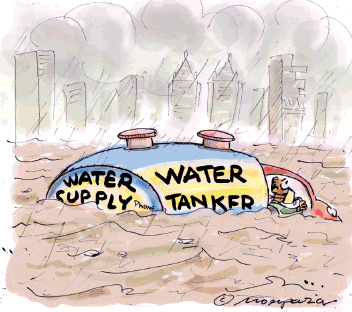 Heavy rains and strong winds battered south Mumbai, causing flooding in several areas - including Girgaon Chowpatty, Colaba and Byculla - that normally remain flood-free even when the rest of the city is submerged. BMC officials told Mirror that south Mumbai received more than three times the amount of rain than the suburbs on Wednesday. While Colaba recorded 229.6 mm of rainfall between 8:30 am and 5:30 pm, Santacruz recorded just 65.8 mm. Areas such as Malabar Hill (280.7 mm) and Dongri (260.3) recorded even higher rainfall than Colaba. The BMC also reported 101.4-kmph winds at Marine Lines at 4.15 pm.
Officials said that in south Mumbai, heavy rains coincided with the 4.41-meter high tide at 1:19 pm. The tide receded only around 7:30 pm, leading to heavy flooding across the island city. “There is a major outfall (which brings all the rainwater from the area to the sea) opposite Wilson College near chowpatty. The tide was so high that it was above the outfall, so there was no chance of the rain water going into the sea. There was unprecedented rainfall through the day,” said Prashant Gaikwad, assistant municipal commissioner, D ward.
The BMC recorded six incidents in which houses collapsed - three of which were in south Mumbai. It also recorded 112 incidents of trees and branches falling in the island city, and only 13 in the western suburbs and 16 in the eastern suburbs. Fallen trees were reported at Marine Drive’s D and F roads, Babubhai Chinai Marg, and opposite the Air India building on Cama Road. Some of the trees damaged cars but no one was hurt in these incidents.
The winds were so strong that a traffic pole was uprooted near Garware Junction at Marine Drive in the evening. According to BMC officials, there was sea water on the road at Girgaon chowpatty. A part of the protective wall along the chowpatty at Babulnath Junction was washed away. Parts of Colaba, Fort and Byculla also reported flooding, as did the state-run JJ Hospital.