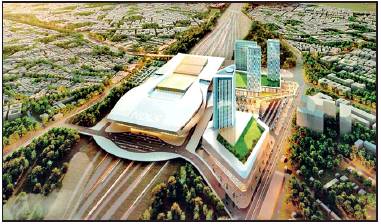 New Delhi railway station will get a swanky look and the surrounding railway land will get a couple of high-rises of up to 40 floors on the Ajmeri Gate side for commercial, office, hotels and other uses by the middle of 2025. The proposed station terminal project is projected to have a built-up area of approximately 33 lakh square feet, which is nearly 60% the size of T-3 of IGI Airport.

Moreover, the proposed station will also have a retail-cum-amenity area of approximately 550,000 square feet. The Rail Land Development Authority has invited bids for this development in the heart of the city at an estimated cost of around Rs.6,200 crore.

Sources said one of the key focuses of the project is to de-congest Connaught Place. The plan includes building four flyovers to connect the surrounding roads that will make the travel to and from stations seamless. There would be a wide pedestrian boulevard from the station to Connaught Place. Officials said there will be total integration all modes of transport at the station. This would feature more than 5,000 parking bays across one or more multi-level car parking.

The RLDA is hopeful of good response considering that the New Delhi railway station is the largest and second busiest station in the country, which handled approximately 4.5 lakh passengers daily before Covid. “Since such contracts are for longer duration, these will attract investors,” said a railway ministry source.

Re-development of railway stations at par with international ones on PPP mode has been one of the main thrusts of the Narendra Modi government.

The bid document for redevelopment of the New Delhi station mentions that the project will involve relocation of railway offices and buildings, commercial developments for retail, hotels, offices and serviced apartments on designated locations.

The government has been trying to redevelop the station for more than a decade.