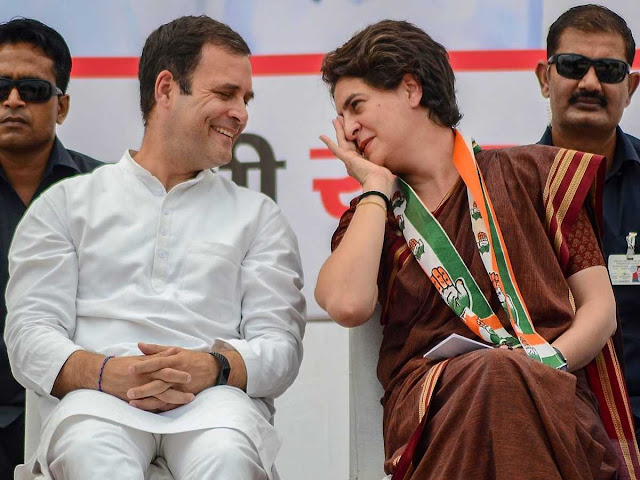 Congress general secretary Priyanka Gandhi Vadra has said a non-Gandhi should become the party chief as sought by Rahul Gandhi after he quit the post following the Lok Sabha poll debacle in May 2019.

“Perhaps not in the (resignation) letter, but elsewhere he has said that none of us should be the party chief, and I am in full agreement with him,” Priyanka said, adding, “I think the party should also find its own path.” On the Congress losing the battle of perception against the BJP, she said the party was slow to understand the “new media” and by the time it thought of putting out its point of view, the damage had been done.

Priyanka also said that she would follow the instructions of a non-Gandhi “boss”, whether she gets the organisational charge of Uttar Pradesh or Andaman and Nicobar. The comments are part of an interview published in a book on next generation leaders of India, excerpted by The Print.

Priyanka Gandhi Vadra has been quoted as saying that after the BJP levelled allegations of corruption against her husband Robert Vadra, she clarified everything to her son and daughter. “After all the allegations were made about my husband, my first reaction was to pay a visit to my 13-year-old son and to show him every single transaction… I explained this to my daughter as well. I don’t hide things from my children, even the mistakes I make or the weaknesses I have. I am very open with them,” she said. The Congress leader said ED interrogations of her husband and TV debates on the matter affected their children.

Priyanka said it was witnessing the “destruction of everything that our freedom fighters fought for and built” that pushed her to finally join politics. She has also said that she is “very anti-legacy”.

“I think kids should not have a legacy. We should not leave them with a legacy of good or bad. They should be free. Therefore, I frankly need not be remembered.”