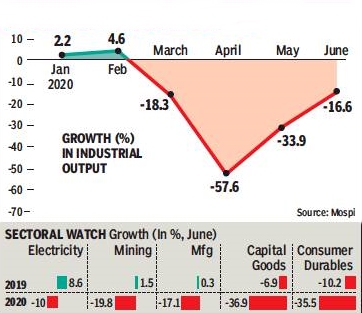 The country’s industrial output contracted for the fourth successive month in June, led by a decline in manufacturing, mining, electricity and capital goods segments as the coronavirus-induced lockdown continued to take a heavy toll on the crucial sector.

The index of industrial production contracted 16.6% in June, compared with a fall of 33.9% in the previous month and 1.3% expansion in the same month last year. For the April-June period, industrial output contracted 35.9% compared with an expansion of 3% in the year-ago period. The data showed that the pace of contraction has slowed in June compared to May, reflecting the impact of the restart of economic activity across the country as authorities eased lockdown measures.

The NSO reiterated that it may not be appropriate to compare the IIP in the postpandemic months with the IIP for months preceding Covid-19. The manufacturing sector contracted 17.1% during the month compared with an expansion of 0.3% in June 2019. The mining sector fell 19.8%, while the electricity sector contracted 10%.

The capital goods sector, which is a key gauge of industrial activity, contracted 36.9% in June compared with a decline of 6.9% in June 2019. The consumer durables sector continued to be under pressure, declining 35.5% during the month compared with the contraction of 10.2% during the same month last year. The only bright spot in the data was the consumer non-durables sector, which grew 14% during June 2020 compared to an expansion of 7% in June 2019. The consumer non-durables sector includes items of daily use such as edible oils, milk, toothpaste, rice and biscuits.

A majority of economists and the RBI expect the economy to contract in the current fiscal, while the finance ministry has indicated that the impact of the lockdown may not be as sharp as estimated as green shoots of recovery were visible in some of the key sectors. Economists said they expect the industrial sector to remain in the negative zone but the pace of contraction is likely to moderate.